The building of a new outdoor classroom with specialist accommodation.

After several years of planning and preparations, including months of newt catching (honestly!) building is now well underway.

On the site of our old, and underused, stables building a new building is being constructed that will include:

Once finished in the Spring the building will be available to be used in many flexible ways, including:

During the construction of the new building we will endeavour to ensure that any impacts of the works on our visiting groups are kept to a minimum.  The vast majority of the work will be in the area of the new building, which is securely fenced and is not close to our accommodation buildings, during midweek working hours.  The new building has already been connected to the existing buildings by water, drains, power and a path so any disturbances to the main areas of the centre will be minimal in the future.

If you have any questions regarding this exciting development please do not hesitate to contact us.

The roof is almost finished and it is really taking shape now.  New paving has been put down to link the new building to the main centre.  The electricity has been connected, ground source heating installed and the under floor heating system is now functional. 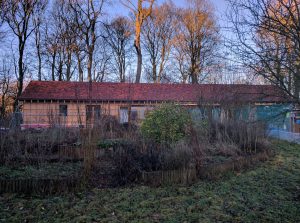 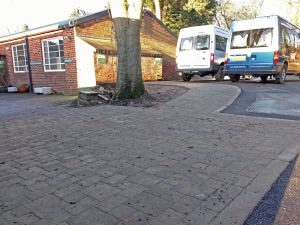 It’s exciting to start to see some finishes going on, both inside and outside the building,  including roof shingles, exposed internal beams, doors, windows and plaster work. 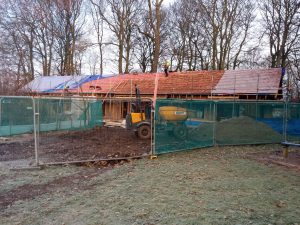 Some great problem solving skills were shown by the ground source heating bore hole drillers – to avoid the metal tracked drill damaging our new back drive a relay of old tyres was laid ahead of the tracks.

Drilling wasn’t as straightforward as hoped, but drilling over to 80m+ underground was always going to be a challenge. 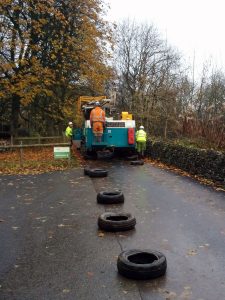 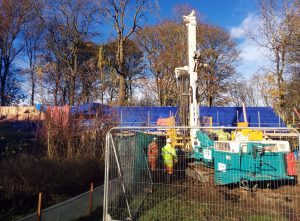 Extensive pipework has been laid in swirls for the underfloor heating ready for the screed to be laid.  It’s going to be cosy in there! 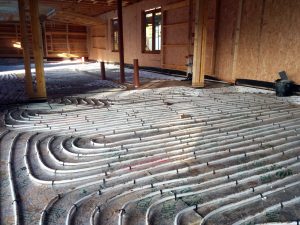 It was great to meet with the architect and interior designer today to discuss decorations, floor coverings and furnishings – it’s going to look brilliant. 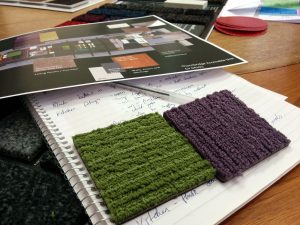 Already it is starting to look more like a building. 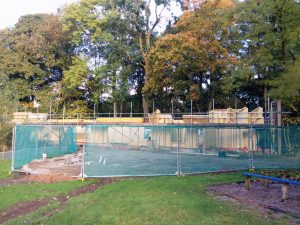 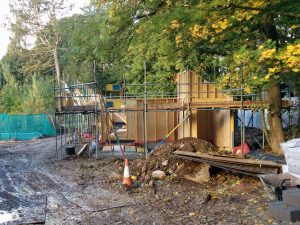 Today the big crane turned up to start putting the timber frame in place, we will see some dramatic visual changes in the next week or so.  Work has also started on digging trenches across the car park for the power and water for the building. 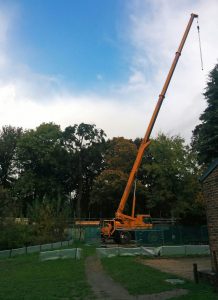 The Yurt now has power and the newt fencing around it has been taken down meaning it’s back into full use as part of the centre.

Fencing has been erected around the far side (from the centre) of our carpark to protect our trees throughout the rest of the building project, along with matting to protect their roots where needed.

Within the contractors compound preparations are ongoing for the ‘floor slab’ for the main building.  A large wooden mould has been built ready for the delivery of the concrete, upon which the rest of the building will be built.  It’s exciting to finally (the project has been years in the planning) see the new building underway.

Alongside work on the building itself the contractors will soon be digging trenches to get power and water to the building and drains away from it.  This will involve some digging on our carpark but will be carefully managed to minimise the effect upon visiting groups.

A new path is being created to the Yurt which has now moved to it’s new location nearer the Sky Ropes.  Soon the power will be re-routed and it will be ready to use again. 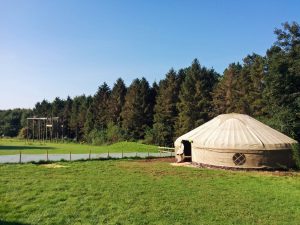 The contractors container and cabin are set up on the far side of the carpark, where the bike storage containers used to be.

In the main contractors compound the base of the stables has been removed and clearing undertaken ready to start creating the floor slab of the new building.

The contractors, T&C Williams, have made the most of their 2 weeks onsite.  Work done so far…
•    the building area has been fenced off
•    the site office set up
•    the stables have been demolished
•    a new base has been built for our 9 metre diameter yurt 100m south of its previous location
•    the yurt has been moved, by Albion Canvas who made it for us, to its new home

30th August 2021
0 Comments
It’s exciting to have a refreshed staff team working with our first autumn school groups this week and feels like the right time for an update: Much needed school residentials Despite the sterling efforts of parents and school staff there’s no doubt that many children have missed opportunities during the pandemic.  We feel now, more

30th August 2021
0 Comments
Over the last 9 months there have been lots of changes within the Thornbridge Outdoors team – with a few more happening over the next month: Goodbye and best wishes to Customer Services and Business Support team Hayley – who many of you will have spoken to as receptionist and was the whizz behind our

11th May 2021
0 Comments
We’re excited to be recruiting some new staff members to come and join the team here at Thornbridge Outdoors. We’re looking for: An Outdoor and Environmental Education Tutor.  This full time, permanent position is an exciting opportunity for someone to join our small permanent instructor team.  Details at https://www.sheffield.gov.uk/home/job-vacancies/Joblistings/outdoor-and-environmental-education-tutor Casual Outdoor Education Instructors.  An opportunity

Welcoming guests back to the centre

30th April 2021
0 Comments
We’re so pleased to see overnight guests arriving to stay the night in the Peak District, after the long spell of Covid lockdown. Hurray! One upside of lockdown is that even more people seem to have discovered a love of the countryside. It’s great to see how much new visitors to the centre enjoy our

22nd August 2020
0 Comments
This week, the instructors here at Thornbridge Outdoors are challenging you to help save the planet as you learn how to harvest rainwater, and then put the rainwater that you have collected to great use at home. As they say, ‘When it rains, it pours!”… but how much does it actually pour versus the tap 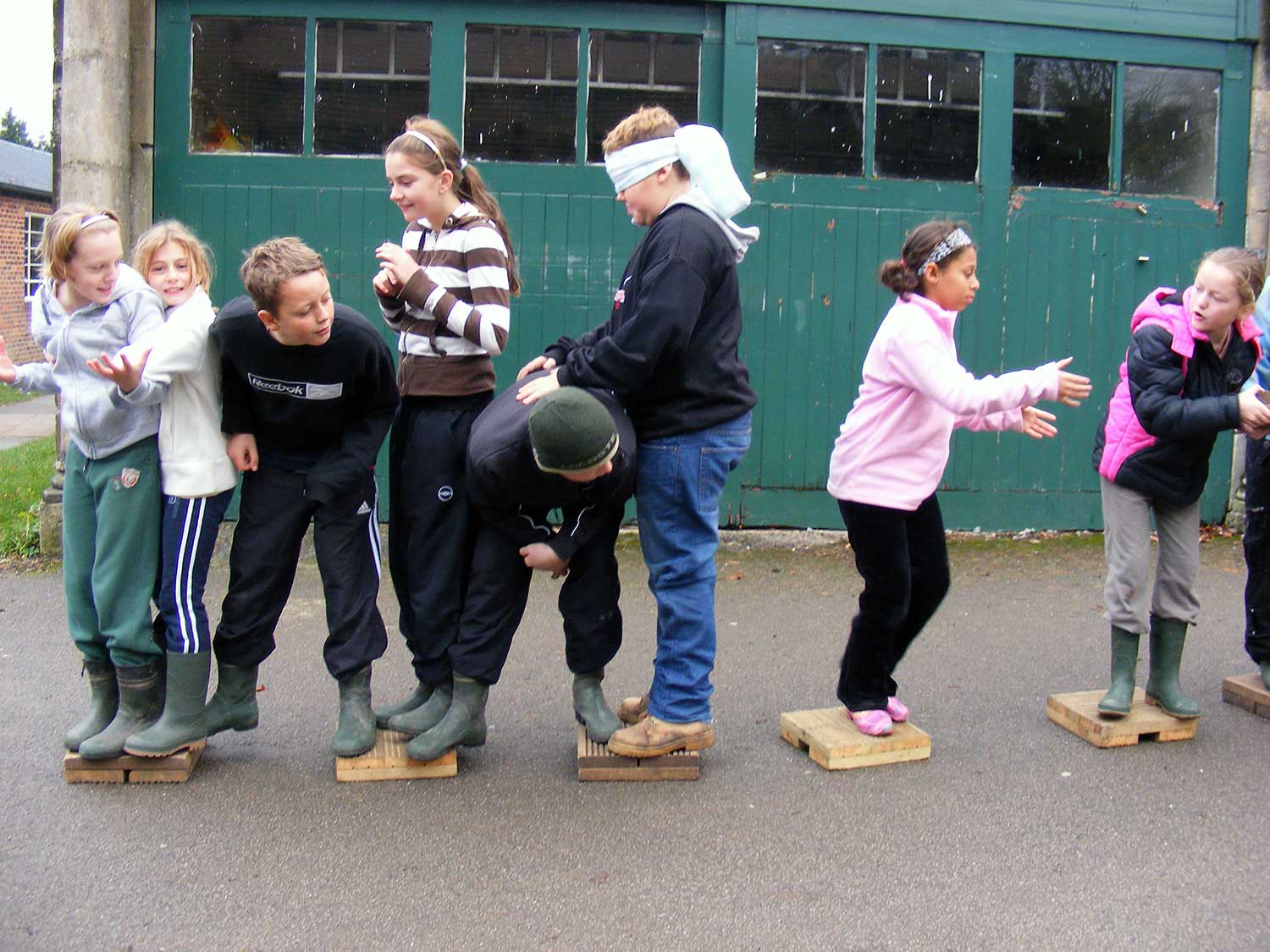 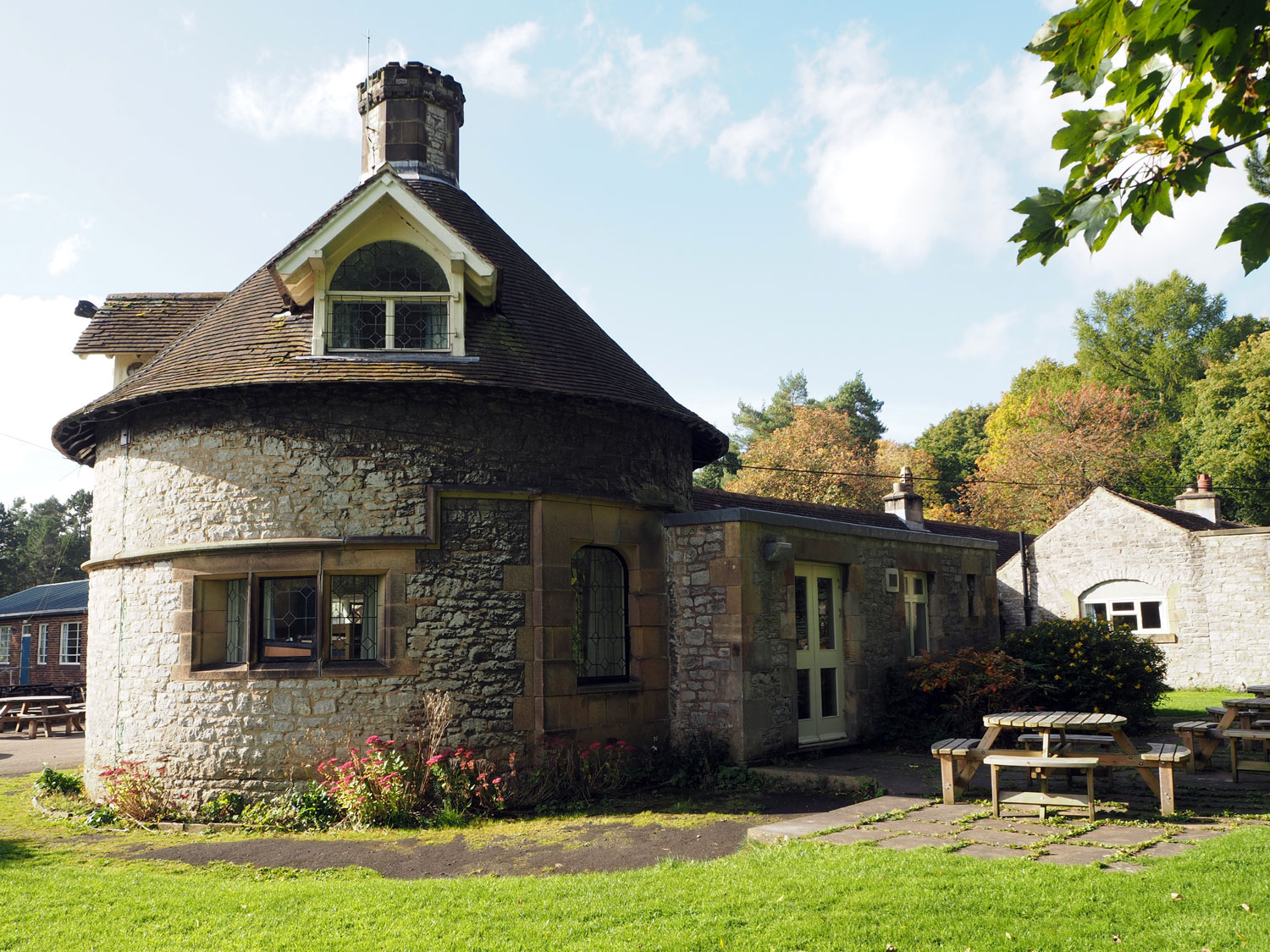 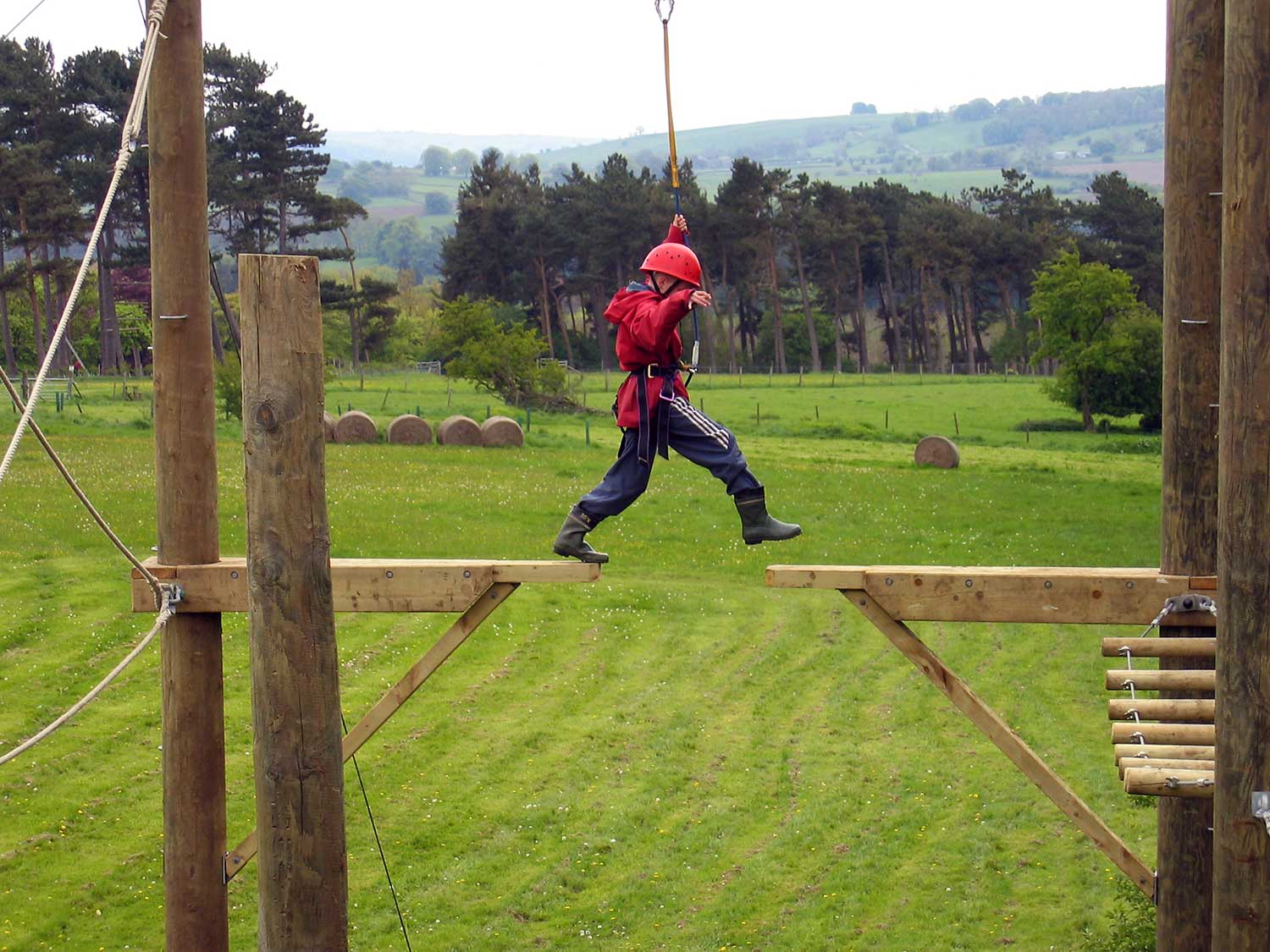 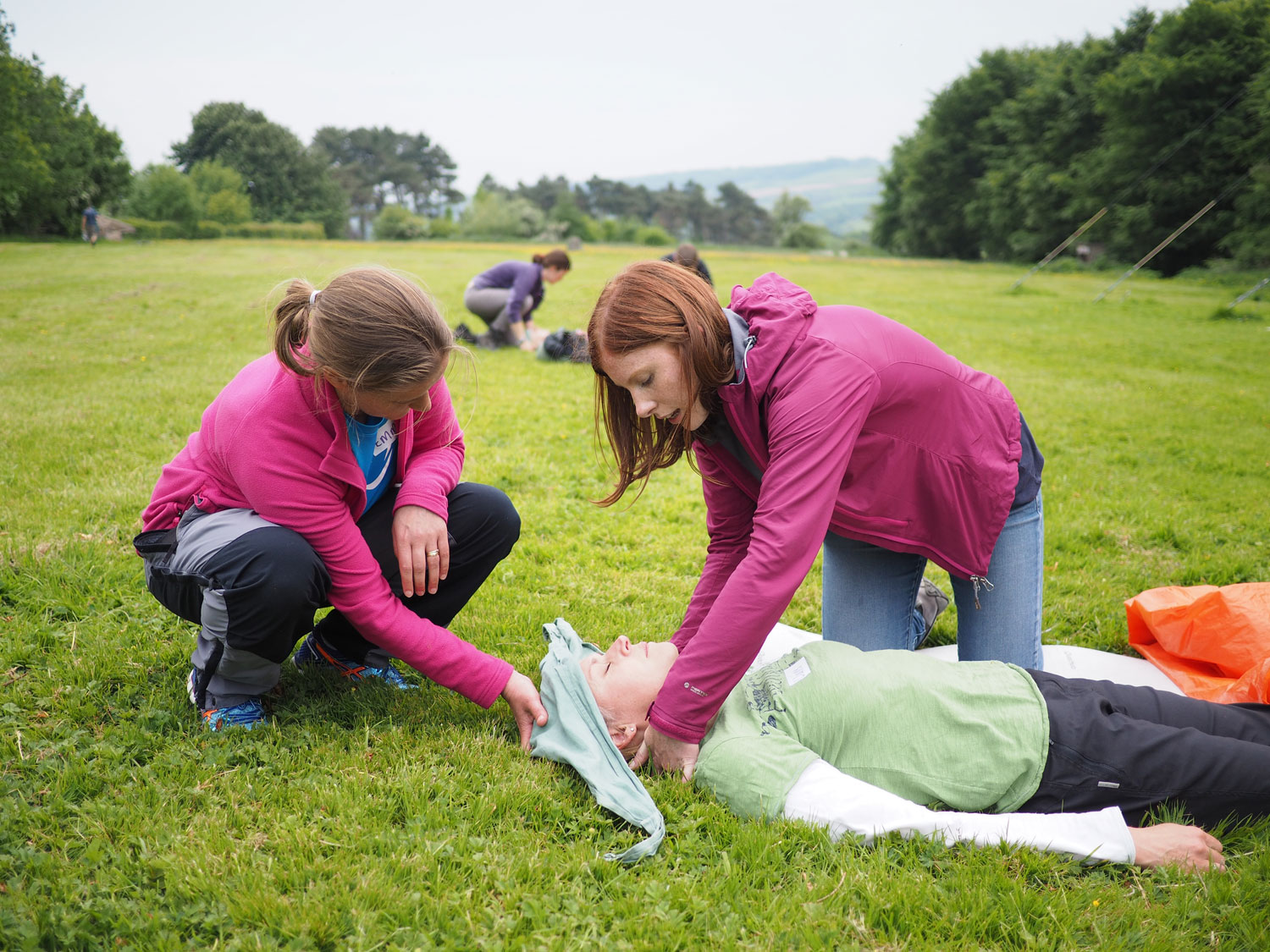